Perfect Budget for Traveling Southeast Asia as a Couple 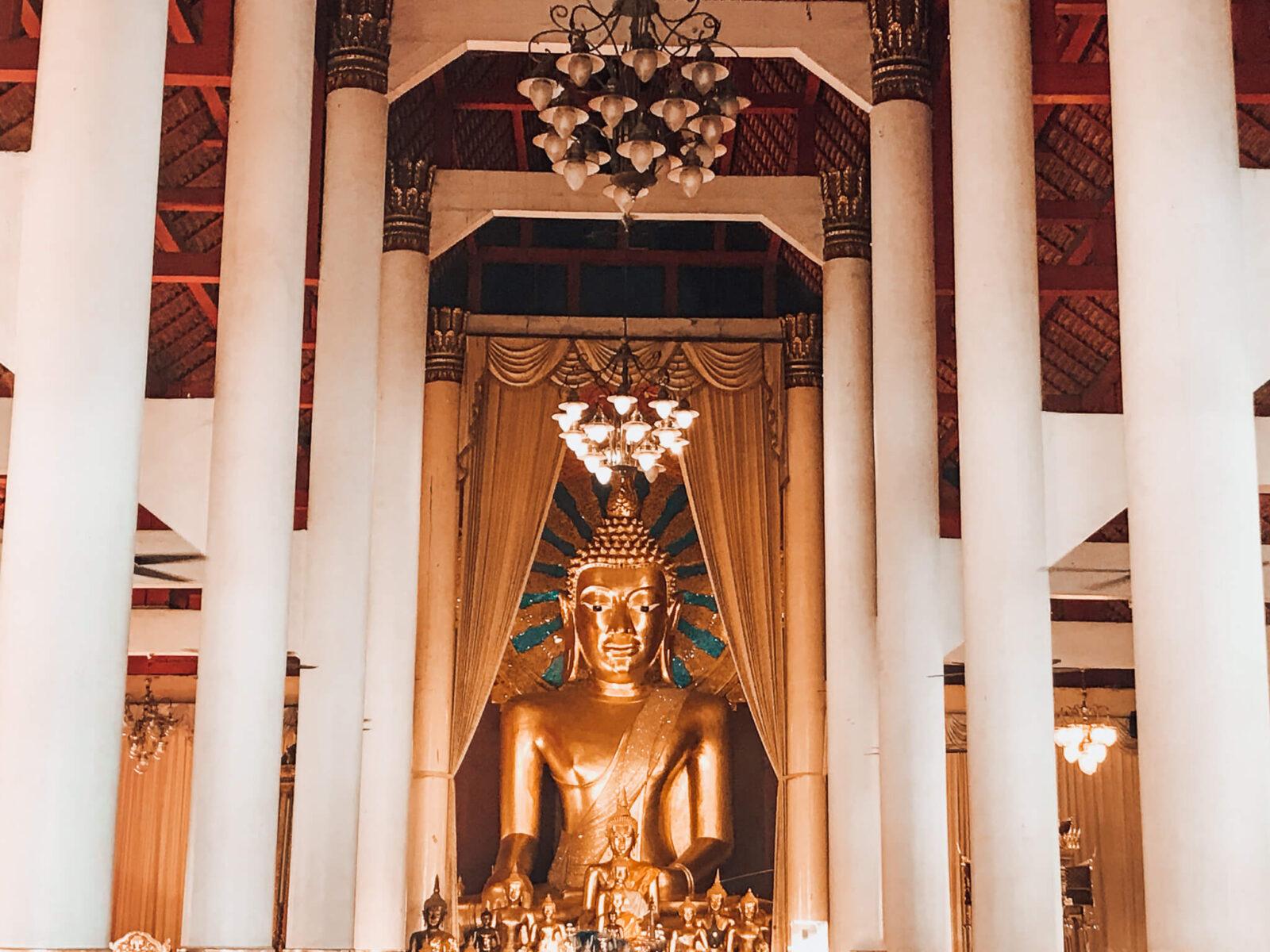 Some posts on this site contain affiliate links, meaning if you book or buy something through one of these links, I may earn a small commission (at no additional cost to you!). This includes (but is not limited to) VRBO, TripAdvisor, World Nomads, etc. Read the full disclosure policy here.

Coming up with a trip budget is difficult, to say the least, let alone a budget for traveling Southeast Asia as a couple.

You’ve heard countless people who have been there saying just how cheap Southeast Asia can be, and to some extent, they’re right… but how right are they? And who is it that is saying it’s so freaking cheap?

The truth is if you’re staying in a hostel dorm, eating only street food, and doing the free tours and super cheap trips offered by said hostels meant for backpackers… you’ll probably only be spending like $20-30 a day.

But what about those of us who don’t want to stay in hostels?! You know, like couples that are opting for a romantic getaway or honeymoon?

Chris and I faced the same challenge. We wanted the perfect 3-week trip to Southeast Asia, but, as this was our honeymoon, we were not about to stay in hostels with gap year kids or young twenty-somethings taking a soul searching trip and partying all night. Nothing against them (and believe me, I have been one of them), but now that we’re in our thirties, that’s just not our thing.

That being said, traveling Southeast Asia as a couple is NOT crazy expensive at all. In fact, we had plenty of meals that were definitely less than $10… heck, some were only $3! But let’s talk about how much to actually budget for a trip to Southeast Asia together.

The Perfect Budget for Traveling Southeast Asia as a Couple

If you’re also the type of couple that enjoys a good splurge here and there but keeps a budget in mind, then this is the budget for traveling Southeast Asia as a couple for you!

If you’re flying to the other side of the world, flights can sometimes be tricky to find on the cheap. However, I highly recommend services like Skyscanner or Hopper to help you find the best flights and book at the right time. Hopper is a fantastic app that you enter in your airport, destination, and it’ll show you the best dates to book OR you can watch it and it’ll alert you when prices drop so you can book!

We used this for finding flights to South Africa a couple of years ago and got Cleveland to Johannesburg round-trip flights for only $850 a person!

Then, of course, my favorite is Skyscanner. It’ll help you find the best time to go, and even combine various airlines, even airlines that are not in the same alliance AND discount airlines, meaning you’ll get the best deal! My advice is to wait until Hopper says to book and then book via Skyscanner.

With these tricks, it is entirely possible to get your flight to Southeast Asia for under $1,000 a person.

Then, Of Course, There’s Always Miles

Or you could save thousands of dollars and fly business or first class using miles! This is what we did, as we wanted to be fancy on our honeymoon. We cashed in 180,000 United miles and $60 each and got round-trip business class flights. Talk about a great deal! What better way to start your romantic trip than being pampered and refreshed in business class with free champagne?

Cost of Getting Visas For Southeast Asia

Travel insurance is no joke. I used to never travel with it. I also used to be incredibly dumb and not make the best decisions (I’m sure you did the same between 18-23).

But now, I never leave the country without it. I highly recommend getting travel insurance for your trip to cover unexpected hospital visits if someone gets sick or injured, trip cancellation or interruption, baggage loss, and any other incident you’re hoping will never happen.

I always go with World Nomads for all of my travel needs. The cost for the two of us was right around $340 for 3 weeks for the Explorer Plan. You can also do the Standard Plan and get it cheaper.

Cost of Actually Traveling Around Southeast Asia as a Couple

Okay, now that you’re in Southeast Asia let’s talk about getting around. And this is where I can confidently say, yes, this place is SUPER inexpensive.

There are quite a few options as to getting around Southeast Asia:

Side Note: For booking flights around the region, I recommend using Skyscanner. For buses, trains, or ferries, check out 12GoAsia.

This area of the budget can range from super cheap to really expensive! Hotels can range from small, guesthouses at $20-30 a night, to luxury, boutique resorts upwards of $400 a night. It really is up to you. We opted for an in-between. We wanted some luxury and rooftop pools, but we also didn’t want to fork over $400 a night… that would severely diminish our budget.

Cost of Activities During Your Trip to Southeast Asia

Right. So let’s talk about the fun stuff: what romantic activities you’ll be participating in with your significant other while exploring this amazing part of the world together!

There is so much to see and do in the various cities and countries in this glorious area called Southeast Asia. Some of the ones that we partook in included: Elephant Nature Park in Chiang Mai, a cooking class, a Halong Bay Cruise, visiting Angkor Wat and a driver for Angkor Wat, getting a boat around Koh Lipe for a snorkel tour, etc.

We ended up averaging about $70 a day for activities between the two of us. I’d say that $50-70 a day for two people on entertainment should cover most of what you’ll be doing.

How Much is Eating and Drinking While Traveling in Southeast Asia as a Couple?

You’re bound to get a little hungry, right? Southeast Asia truly lives up to its inexpensive reputation when it comes to food. Chris and I got an appetizer, two entrees, and two beers for only $6 at a sit-down restaurant in Hanoi. Bowls of pho at another restaurant were $1.50 per person. Khao soi in Chiang Mai was also only an astounding $1.50.

There are also some nicer, sit-down places where you can anticipate spending $25 or so for two people for a nice dinner and drinks.

You’ll eat well in Southeast Asia, and you’ll not pay for it… at least not in money. Bloating or other tummy troubles, I can’t guarantee.

Beer is the common drink of choice in Southeast Asia, with each country and city having its own kind. They are typically $2-3 a can or bottle at most restaurants and a little cheaper than that at your friendly 7/11. Cocktails are about $6-8, especially on the islands or beaches.

How Much Did We Spend While Traveling Southeast Asia as a Couple?

We ended up spending $6,800 total for 3 weeks in Southeast Asia. That is all flights, hotels, transportation, insurance, food, drinks, souvenirs, visas… everything. And only $5,065 actually came from our own pockets, while the honeymoon fund covered the rest.

Remember, You Can Save Money Too!

Okay, I know the backpackers reading this are probably shocked and appalled. I know, you could probably do Southeast Asia in three weeks for as little as $3,000-4,000 for two people with flights, cheaper accommodation, buses, only street food… and a LOT less luxury.

However, when you’re traveling to Southeast Asia as a couple, sometimes you want a little luxury. Sometimes you want that romantic cruise along Halong Bay in your king-sized bed and Jacuzzi tub. Or maybe you want one of the more expensive passes to Elephant Nature Park where you go in a smaller group and get an elephant to yourself to walk, feed, and pet for the day. These little luxuries cost more but are 1,000% worth it for amazing memories with your love.

You also may want to be super bougie and spend even more on 5-star hotels at every destination, private, guided tours, and even more add-ons that could soar the cost upwards of $10,000-12,000. It really depends on your travel style.

So, when it comes to Southeast Asia for 3 weeks, a budget of $6,000-$7,000 is perfect for two people, especially while traveling with a mid-range to a little more luxurious budget.

Lastly, if you travel in the off-season, you’ll definitely find better deals. We went in November, during shoulder season, but if you came during the rainy season (no, it doesn’t rain all the time), you’ll definitely get much better pricing on hotels! And, of course, if you’ve got hotel points, you could cash them in for more savings too!

Whew, I know budget talk isn’t the sexiest conversation to have while trip planning, but it is so important to have a good budget in place before your trip to ensure you don’t overspend. But hey, it’s worth it to add in a few luxuries to #treatyoself too.

Have you traveled to Southeast Asia? What kind of budget did you go with? Was it much more expensive or much less? Let me know in the comments!

Love this post or want to save for later? Pin it here!

Founder of World Wide Honeymoon. I'm a travel hacking addict who is passionate about helping other couples experience the world through travel and getting there for less (and maybe in a little luxury). In my spare time, I enjoy running, listening to podcasts, and taking too many photos of our cat, Professor. 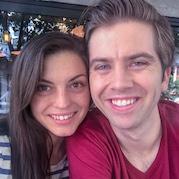 Hello and welcome! We’re Kat and Chris, newlyweds navigating the world of couples travel while exploring adventurously throughout the globe as often as we can, because why does the honeymoon have to end? We are traveling more for less using money-saving skills, miles and points, and splurging when it feels right! Learn more about our story here!